As per the last blog, the first novel of my post-UK period, The Family Idiots, is near enough finished (just proofing, etc) so I have moved on to writing the next two books, in parallel and (sort of) intertwining: Urim and The Museum Quarter. Contrary to the implication of the title, The Museum Quarter is as much about museums as Sartre’s Roads to Freedom is about living in Paris or Lord of the Flies is about life on an island. Maybe its antecedence is closer to George Perec’s Life: A User’s Manual (without the OULIPO).

If you watch ‘how to write’ YouTube videos etc. (which I wouldn’t advise), one of the things often extolled is “world-building” your novel, a convincing world for the reader to navigate. The Museum Quarter is not about museums, but there are five museums in its world. Two or three of them are composites of museums I know well, but I wanted a New Art Museum, which needed to be authoritatively contemporary. So rather than conjure up something architecturally unconvincing, I turned to a real architect, Maurice Shapero, whom I curated in my last show in Bury Art Museum. After the show we completed a book of my poem ‘Architecture & Now’ and his drawings but Covid and related budget issues interfered with the final production. Although the new novel is set in an unspecified city, there is a steeply sloping site in Porto, slowly intersected by the curve of Rua Amaldo Leite and Rua da Mocidade da Arrábida, and dropping down from Campo Alegre to the Douro river, which I walk Barney through quite often and I began to see this as the location for the New Art Museum. 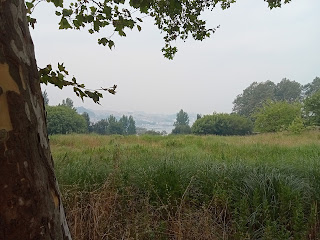 I shared a Google maps screenshot to Maurice, hopeful that he’d be at least up for a quick sketch from his kitchen table which I could fill in the gaps novelistically. But it turns out novel ‘world-building’ has stepped up to a level, maybe even to a new genre. Architects rarely get a brief for such an ambitious site, where there is no budget limit and no planning bureaucracy, an opportunity for free architectural expression; this is the sort of non-brief I used to give artists I was curating. Who cares what the curator wants? It’s the artist that is doing the creating. And Maurice has embraced the brief: the Museum Quarter will have its New Art Museum (link). I look forward to the novel’s ‘characters’ wandering its halls incised into the slope (below): 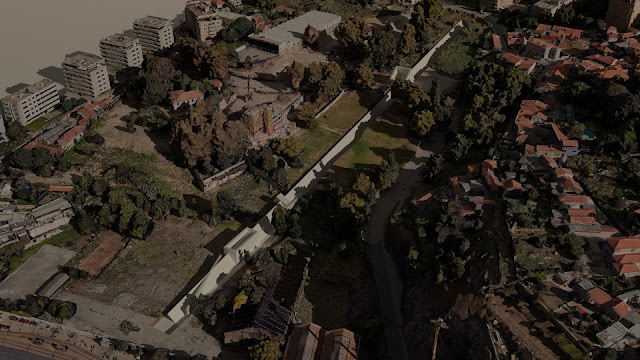 I’m not going to say much more about the novel because the focus is on writing it rather than talking about writing it, but with five museums to wander around, in the same spirit, I have also invited one guest curator and various artists to exhibit in shows that won’t exist. Hopefully, the novel’s funders, ‘stakeholders’ and visitors to these museums are not going to be happy.

Popular posts from this blog

Not Curating For The Future

November 26, 2009
I had expected today to blog about the future of curating because I attended the Renaissance North West Conference "Curating for the Future", http://www.mla.gov.uk/what/programmes/renaissance/contacts/renaissance_north_west which should have given me some interesting things to get my teeth into. However, it turned out that the conference had very little to do with what I think of when I use the word "curate". Indeed, on reflection, I don't think I heard the word used. Come to think of it, artists werent mentioned either. It turned out that curating in the context of the conference meant "our sector strives for organisational and environmental sustainability to ensure we continue to exist, develop and provide relevant and inspirational services to the public we were." The conference opened with a speech from the Culture Minister - delivered by the top civil servant from the Dept. of Culture because she had been required to do something more important
Read more

For years while curating and directing Bury Art Museum and the Text Festival, I mostly put my own work on the backburner. My first publication 50 Heads (downloadable version here )  was only written in 2006 because I was able to take a sabbatical, and was mostly written in Iceland, Netherlands, Japan and Italy. This became one of the features of subsequent publications with them written around the world at a creative distance from the day job. My second book was eponymously located in Reykjavik alongside my exhibition (alongside Dan Flavin & Alan Charlton) at Safn. Reykjavik cover Space The Soldier who died for Perspective ( Veer Books ) is even structured in sections identified for the location they were written or installed (Tampere, Berlin, Bertinoro, Melbourne, Budapest, Edinburgh). By the time my Bury projects had reach China my workload was so great that I sort of announced my retirement from writing with The End of Poetry   . So leaving Bury meant I could finally give
Read more