My initial solution is implied in the title – the urge to ‘over-production’, the geographical ubiquity, the alienation of scale – suggested a cabinet of curiosities style installation. Not only was this inherent in the vispo landscape, but it also challenges the expectation of display as restrained in the minimalism of the white cube. Again, generally, on the odd occasion when vispo is curated it seems routed in a static idea of curating, a response to space that is inherited from galleries seen, rather than an engagement between the work and spatial immanence. Although it was my intention to pack the show to the roof, but as Picasso once advised, you should avoid the seductions of pretty ideas. So as the mass of works came to be laid out in the room, a new dynamic imposed itself – rooted in the original Wunderkammer idea but taking the visitor/reader through the space as an interweaving of vispo styles, methods of production, technologies, ideas exchanged in juxtaposition, and curatorial judgements about how blocks of works, colours, eye-lines, desire paths enhance the experience of passing through the space.

For the Sentences show, I set out to investigate the problem from a different direction. In looking at how conceptual artists have approached language in art, the simple observation is their tendency towards the sentence as the unit of composition – which is a relatively straightforward place for poets since LANGUAGE. And in consideration of the lack of stylistic expertise that might give poets “access to the “vocabularies” of novelty, glamour, and fashion, required to address the world of art with an impressive, innovative gesture”, I commissioned and sourced poets noted for their work with sentences treated with equality to text-based artists. I’m particularly pleased to be the only context that has commissioned Ron Silliman to create a gallery work; more than that, his neon text has been conceived as a piece of public art which will be repositioned after the exhibition to become a permanent feature at Bury’s Tram Station. Curatorially, this show was conceived to be a significantly minimalist hang to counter balance the excess of the Wonder Rooms show; though to establish a dialogue between the two spaces, a little of the latter style bleeds over into Sentences. 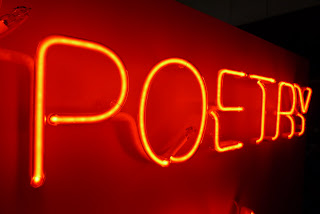 Anyway, there are a number of other ideas which inform the inclusion of Pavel Buchler’s Studio Schwitters, Christian Bök’s Protein 13, Holly Pester’s Text Festival archival work, etc. but I will leave these for visitors to experience. Let’s just say, I endorse Art Monthly’s review comment of the 2009 Text Festival’s “intrepid resistance to interpretation”.
Posted by Tony Trehy at 8:29 PM

Lovely post, Tony. Reminded me of some thoughts I've been having about spatiality in the vispoem: http://fissuresofmen.blogspot.com/2010/12/v-da.html

Thanks Tony, that's really interesting & gives me a new perspective on a lot of the thoughts/questions I had as an (amateur) curator doing infusoria.

Space The Soldier Who Died For Perspective 2009